Ancient Egyptian art refers to painting, sculpture, ceramics, jewelry and other decorative arts produced along the Nile river in what is today Egypt and north Sudan from c. 3100 BC to 30 AD. Characterized by being highly formal and stylized, art of ancient Egyptian remained almost unchanged over a period of more than three millennia. Many of the most spectacular examples originate from tombs and were never intended to be seen. 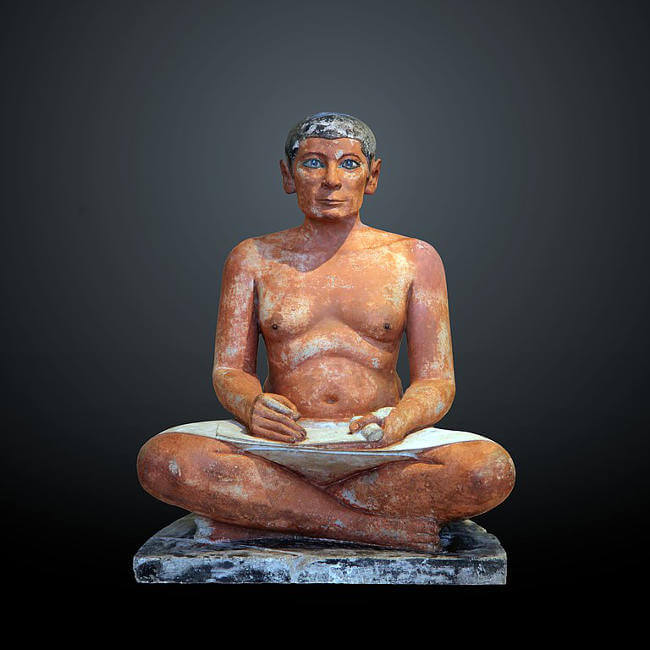 The Seated Scribe is one of the famous and one of the most admired works of ancient Egyptian art. Dated to the period of the Old Kingdom (c. 2500 BC), the 53.7 centimeters (21.1 inches) high statue is an exceptionally realistic representation an unknown seated scribe holding a semi-rolled papyrus scroll. Compared to slightly more rigid body, the face reveals a great attention to detail. This is especially true for the eyes which are made with white magnesite and rock crystal, and outlined by copper. Today on display in the Louvre in Paris, the Seated Scribe was discovered in the mid-19th century at Saqqara. 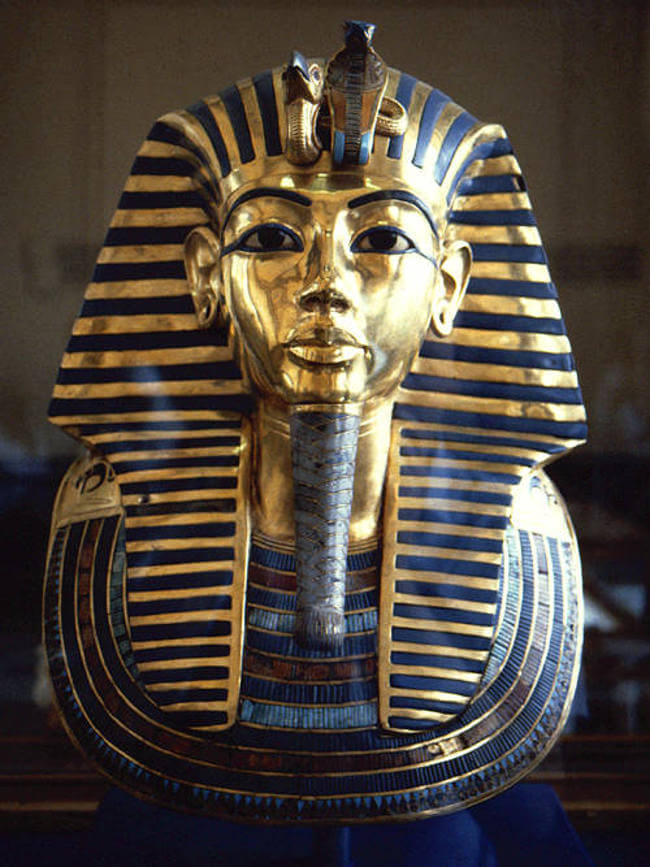 Without a doubt the most famous artwork of ancient Egypt and according to some, one of the finest artworks ever created, the Mask of Tutankhamum is a death mask of Pharaoh Tutankhamum (reigned 1332-1323 BC). Made from over 10kg of high-karat gold with inlaid blue lapis lazuli, the mask is also adorned with turquoise, obsidian, quartz, carnelian and other precious and semi-precious stones. Even though the tomb of Tutankhamum was discovered in 1923, the spectacular Mask was found only two years later when Howard Carter and his excavation team opened the sarcophagus with the Pharaoh’s mummy. Shortly thereafter, the Mask was taken to the Egyptian Museum in Cairo where it remains to the present-day. 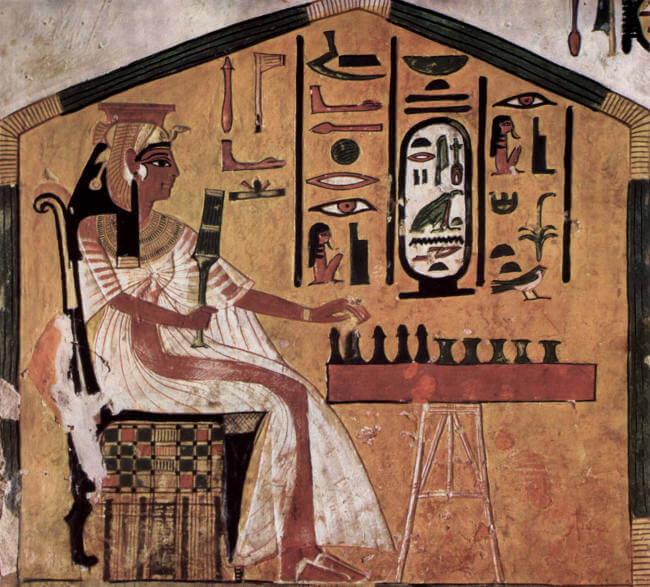 One of the best known wall paintings from Nefertari’s tomb (QV66) depicts the favourite wife of Pharaoh Ramesses II (reigned 1279-1213 BC) playing the ancient Egyptian board game called Senet. Like in other paintings in the tomb, the Queen’s portrait reveals a lot of effort being put into highlighting her beauty. This was also achieved by the use of naturalistic techniques - most notably shading, which at the same time created a more realistic depiction of the beloved Ramesses’ wife. Discovered in 1904 by Italian Egyptologist Ernesto Schiaparelli in the Valley of the Queens in Thebes, Nefretari Playing Senet and other spectacular wall paintings were virtually all he found as the tomb has been looted already in antiquity. For preservation reasons, the Nefertari’s tomb has been closed to public since 1950.

Ani’s Judgement, Book of the Dead (Papyrus of Ani) 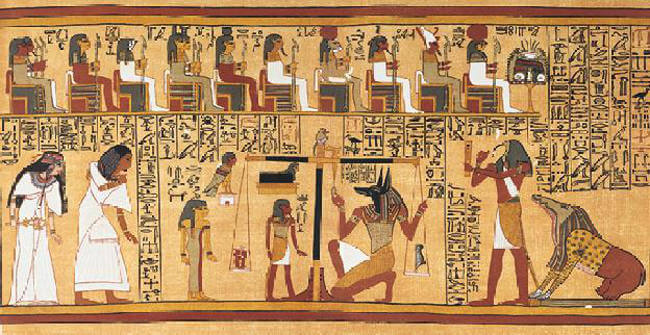 Ani’s Judgement is a scene from the Book of the Dead as presented in the so-called Papyrus of Ani (named Ani after the Theban scribe Ani for whom it was composed c. 1250 BC). The scene depicts the weighing of the heart against the feather of truth or Maat by the jackal-headed Anubis. Further right is standing the ibis-headed Thoth waiting to record the result and behind him, a monster ready to instantly consume Ani’s heart if he fails the heart weighing test. To the left of the weighing scale are the goddess of faith and two birth goddesses, and on the top are the principal gods awaiting the outcome of the test. 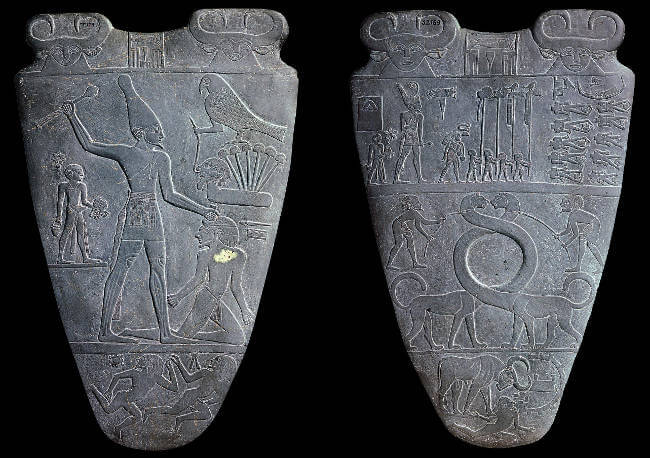 The Narmer Palette is a 64 x 42 centimeters (25.2 in x 15.5 inches) big siltstone tablet which is widely considered one of the most important ancient Egyptian artifacts. Found at the end of the 19th century by British archaeologists James E. Quibell and Frederick W. Green in the Temple of Horus at Nekhen, the tablet is believed to depict the unification of Upper (southern) and Lower (northern) Egypt by King Narmer. It’s style shows great resemblance to the later styles which suggests that ancient Egyptian art was already formalized at the time of its creation. Dated to the 31st century BC, the Palette is today in the collection of the Egyptian Museum in Cairo. 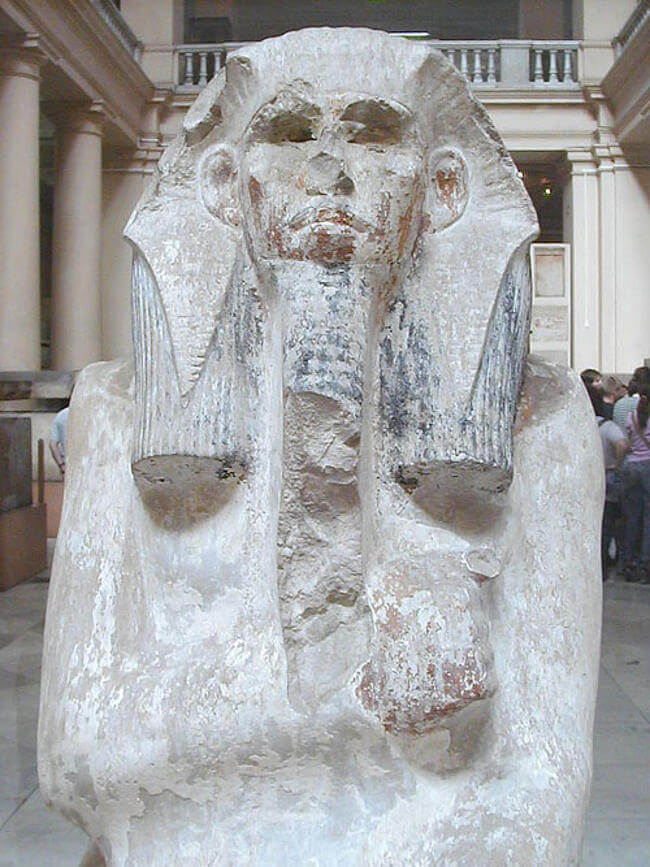 The (life-size) Statue of Djoser is, like its name suggests, a statue of the 3rd dynasty Pharaoh Djoser (reigned c. 2630-2611 BC). Probably best known for building the first Egyptian pyramid - the Step Pyramid (also referred to as the Pyramid of Djoser) at Saqqara - Djoser also commissioned the oldest known Egyptian life-size statue. Made of painted limestone, the seating statue of Djoser was discovered during archaeological excavations at Saqqara during the mid-1920s. It was found in the tomb’s Serdab, a secret chamber with a small opening to allow the soul to move in and out. The original statue is today housed in the Egyptian Museum in Cairo, while the Serdab in Saqqara contains a replica.

Relief of Akhenaten and Nefertiti 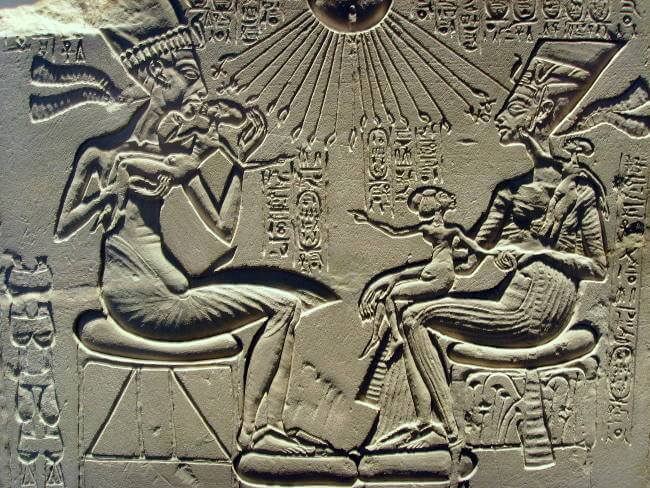 Created c. 1350 BC, the 32.5 centimeters (12.8 inches) high Relief of Akhenaten and Nefertiti is thought to be used as a home altar. Depicting Pharaoh Akhenaten, his wife Nefertiti and their three daughters, the small limestone altar provides a unique insight into the life of the royal family. Above the royal couple is a radiating sun disc symbolizing the god Aten - the center of the new monotheistic religion that was introduced by Akhenaten. The Relief of Akhenaten and Nefertiti also reveals a dramatic break with the traditional ancient Egyptian art; art produced during the so-called Amarna Period tends to be more naturalistic, informal and softer. However, it is not entirely clear why the Pharaoh and his family are presented with such disproportional bodies. 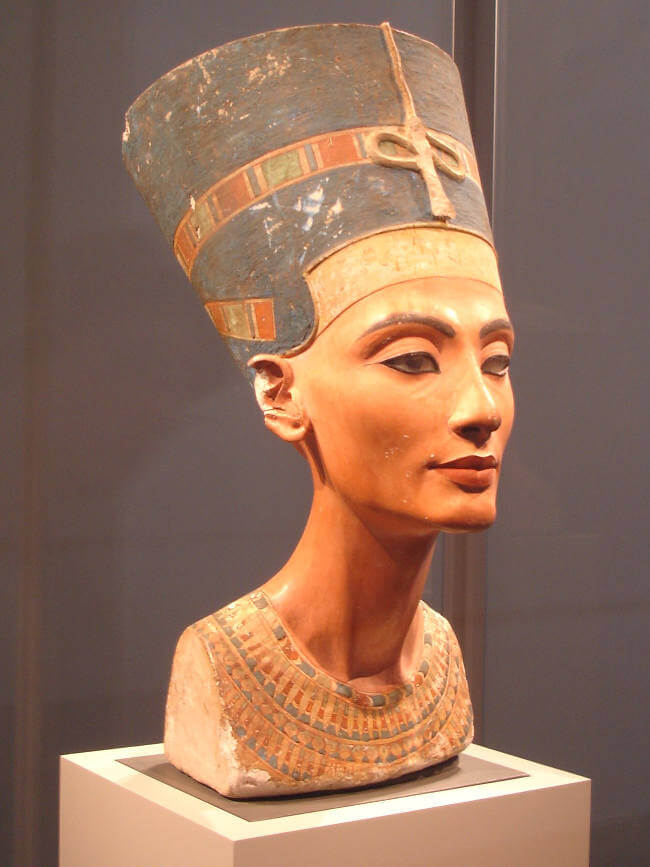 The Nefertiti Bust is another fine example of Amarna art and one of the most famous works of ancient Egyptian art after the Mask of Tutankhamun. The 48 centimeters (19 inches) high masterpiece, which can today be admired in the Neues Museum in Berlin, is thought to be created around 1350 by sculptor Thutmose. This suggests the location of the Bust’s discovery as it was found in the sculptor’s studio in what used to be the city of Amarna. Despite being one of the most admired and copied ancient artworks, it is thought that the Bust was actually a model to either craft a new sculpture or possibly help Thutmose create other portraits of Nefertiti.

Statue of Menkaure and Queen

The Statue of Menkaure and Queen shows the 4th dynasty Pharaoh Menkaure (reigned c. 2490 - 2472 BC) and his Queen Khamerernebty II. Both are presented as ideal male and female, while Menkaure also reflects the ancient Egyptian view of the ideal ruler: strong, muscular and formidable. The Pharaoh is standing with his left leg slightly forward which was typical for ancient Egyptian male sculptures. In contrast, female statues were usually shown standing with both feet together. However, Khamerernebty II is standing with her left leg slightly forward albeit less than Menkaure. The 139 centimeters (54.7 inches) high statue was found in the Menkaura Temple Valley in Giza but it is today housed in the Museum of Fine Arts Boston.

Statuette of Arsinoe II for her Posthumous Cult 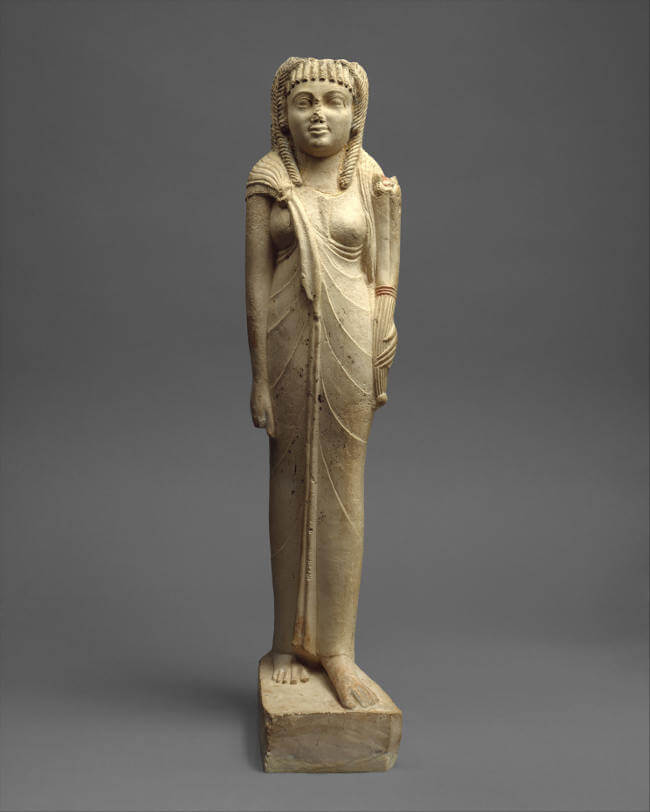 The Statuette of Arsinoe II for her Posthumous Cult is a small, 38.7 centimeters (15.2 inches) high limestone statuette which represents the Egyptian Queen Arsinoe II. It is considered one of the finest examples of the fusion of ancient Egyptian and Greek art which occurred when Egypt was ruled by the Ptolemaic Dynasty of Macedonian Greek origin. While Arsione’s pose and the backpillar are distinctively Egyptian, her hairstyle, large round eyes and the cornucipia she is holding are unmistakably Greek. Created sometime between 150 and 100 BC, the statuette was used for Arsinoe’s posthumous cult which was established by her brother and husband Pharaoh Ptolemy II Philadelphus (reigned 285-246 BC). The Statuette is today in the collection of the Metropolitan Museum of Art in New York.