Byzantine art refers to a distinct artistic style that flourished during the period of the Byzantine Empire (c. 330 - 1453). Its influence, however, survived the fall of the Empire and extended beyond the territories controlled by the Byzantines. Particularly influential in Orthodox countries including Russia, Serbia, Bulgaria and Romania, Byzantine art also left a deep mark on Western Europe, most notably Renaissance Italy. 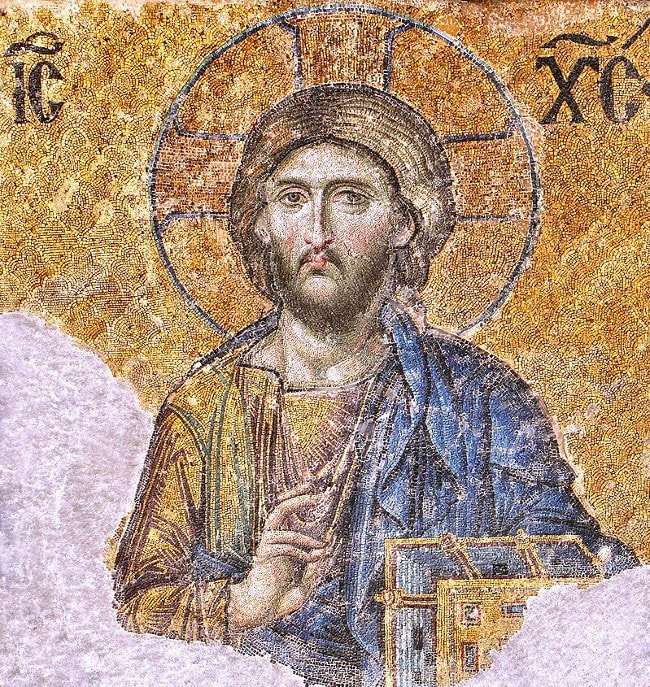 The Mosaic of Christ Pantocrator in the Hagia Sophia in Instanbul, modern-day Turkey, is widely considered as one of the most splendid examples of Byzantine representation of “Christ All-Powerful.” Probably created in 1261, the mosaic represents Christ by a halo surrounding his head, his right hand lifted and his left hand holding a book. On his right is Virgin Mary and on his left is John the Baptist. Also known as the Deesis mosaic, the masterpiece is located in the church’s upper galleries.

Mosaic of Emperor Justinian I, Basilica of San Vitale, Ravenna 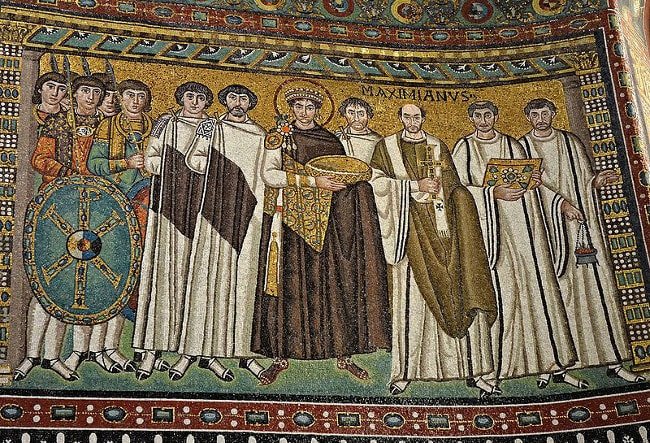 Dating to 527, the Mosaic of Emperor Justinian I in the Basilica of San Vitale in Ravenna, Italy, is one of the most important and most beautifully preserved early Byzantine Christian artworks. It depicts the Byzantine Emperor Justinian I (r. 527-565) who is standing in the center of the mosaic, holding a golden paten. He is dressed in Tyrian or imperial purple, while his head is surrounded by a golden halo, giving him an almost divine status. Justinian is flanked by court officials and soldiers on his right and church officials on his left, further confirming his position not only as the Emperor but also as the leader of the church. 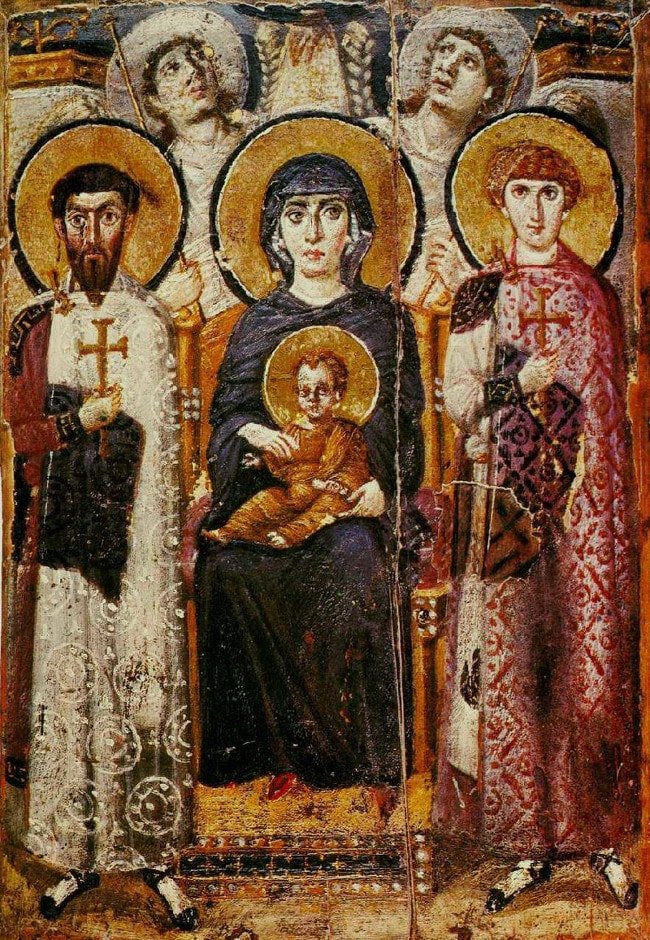 Probably created in Constantinople, the Enthroned Madonna with Child, the Saints Theodore and George, and Two Angels is a 6th or 7th century icon housed in the Saint Catherine’s Monastery on Mount Sinai, Egypt. The icon is depicting Virgin Mary with Christ the Child on the throne flanked by the Saints Theodore and George. In the background are two angels looking at the hand of God above the Virgin. The icon reflects the influence of ancient Roman art but it also exhibits a major resemblance to what eventually become a typical Byzantine icon. 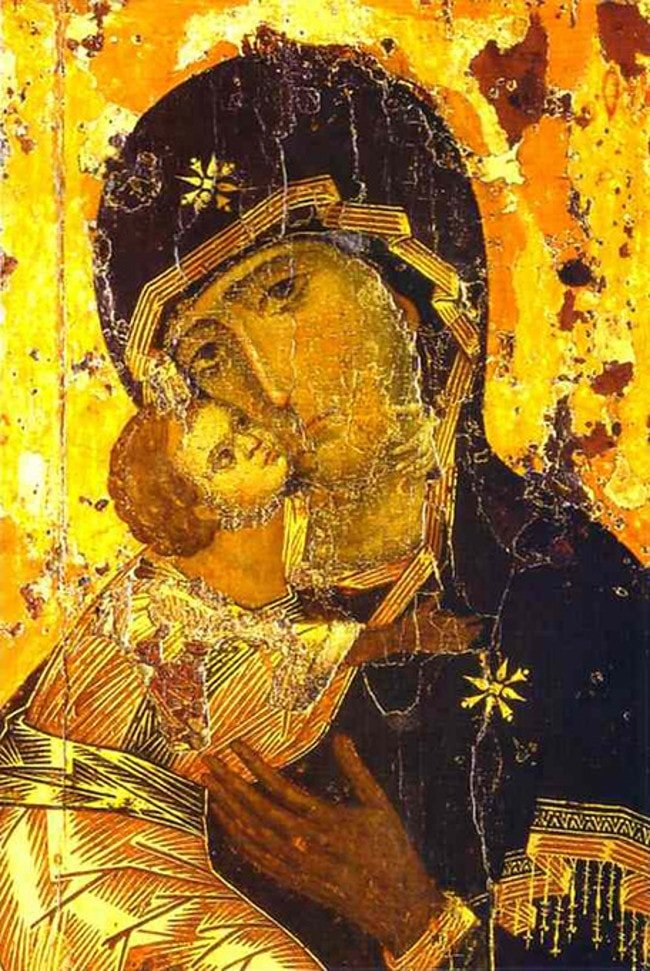 The Theotokos of Vladimir is one of the finest surviving examples of medieval Byzantine art. The icon features the Theotokos (Greek for Virgin Mary) and Christ the Child with his cheek against his mother’s cheek. Thought to have been created in Constantinople during the Komnenian period (1081-1185), the icon was sent to the Grand Prince of Kiev Yuri Dolgoruky (c. 1099-1157) as a gift by the Patriarch of Constantinople around 1131. In 1169, Dolgoruky’s son Yuri Bogolyubsky brought it to the city of Vladimir and thus the icon came to known as the Theotokos of Vladimir. 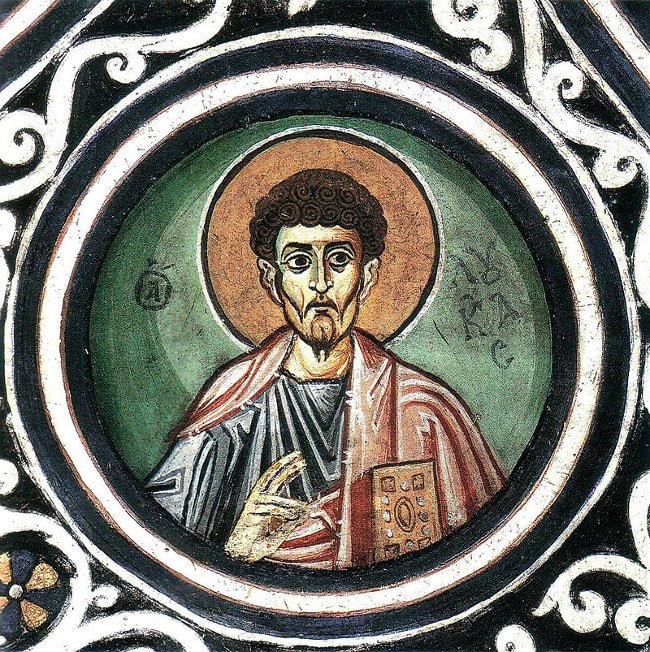 St Luke fresco at the Hosios Loukas, a UNESCO-designated monastery at Distomo, Greece, is a part of the frescoes at the crypt. Rediscovered only in the 1960’s, the crypt frescoes are according to some scholars the most complete surviving collection of frescoes from the so-called Middle Byzantine period (843-1204). They were probably created after the death of Theodore Leobachus, a wealthy government official who is thought to be a major patron and later the abbot of the monastery. 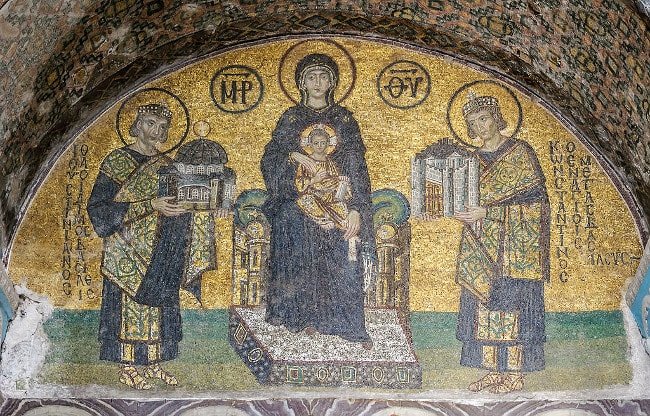 The Virgin with Child is a fresco in the tympanum (semi-circular space) above the southwestern entrance of the Hagia Sophia, Istanbul. It was created during the rule of Emperor Basil II (960 - 976) but was rediscovered only in the mid-19th century during the restoration of the Hagia Sophia by the Fossati brothers of Gaspare and Giuseppe. The fresco represents Virgin Mary sitting on a throne without a back and Child Jesus in her lap. On the left, Mary is flanked by Emperor Constantine presenting a model of the city of Constantinople and on the right by Emperor Justinian I presenting the model of the Hagia Sophia. 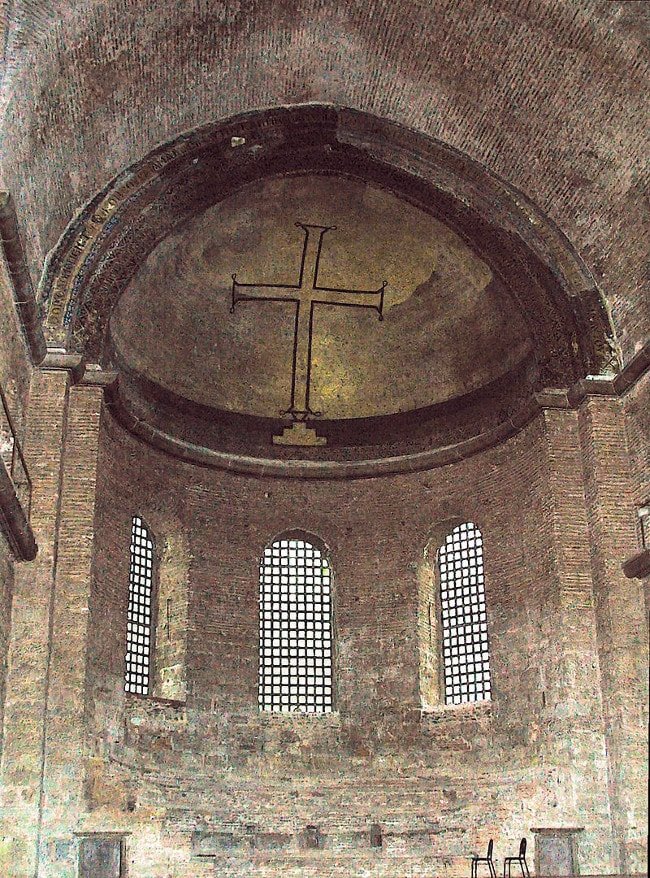 The Cross in the church of Hagia Irene (Saint Irene) in Istanbul is one of a very few surviving examples of the so-called iconoclastic art. Outlined with black on golden background, the mosaic of a simple cross was created during the rule of one of the most “iconoclast” emperors, Constantine V (741-775) who had the church reconstructed after an earthquake in 740. Besides for its iconoclastic art, the Hagia Irene is also known as one of a very few churches in Istanbul that haven’t been converted into a mosque during the Ottoman era. Today, the church is a museum but it is also used as a concert hall. 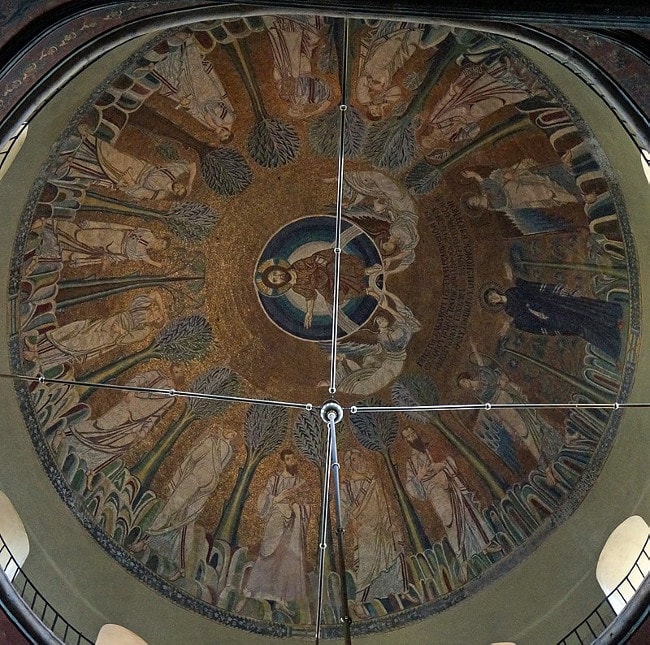 Occupying the central position in the dome of the UNESCO-designated church of Hagia Sophia in Thessaloniki, Greece, The Ascension is an exceptionally well preserved mosaic dating to the 9th or 10th century. It depicts the ascending Jesus encircled by Mary flanked by two angels and 12 apostles who are separated by trees. The mosaic also features an inscription from Acts 1:11 (“Men of Galilee, why do you stand here looking into the sky”).

Mosaic of St Demetrius with the Founders, Hagios Demetrios, Thessaloniki 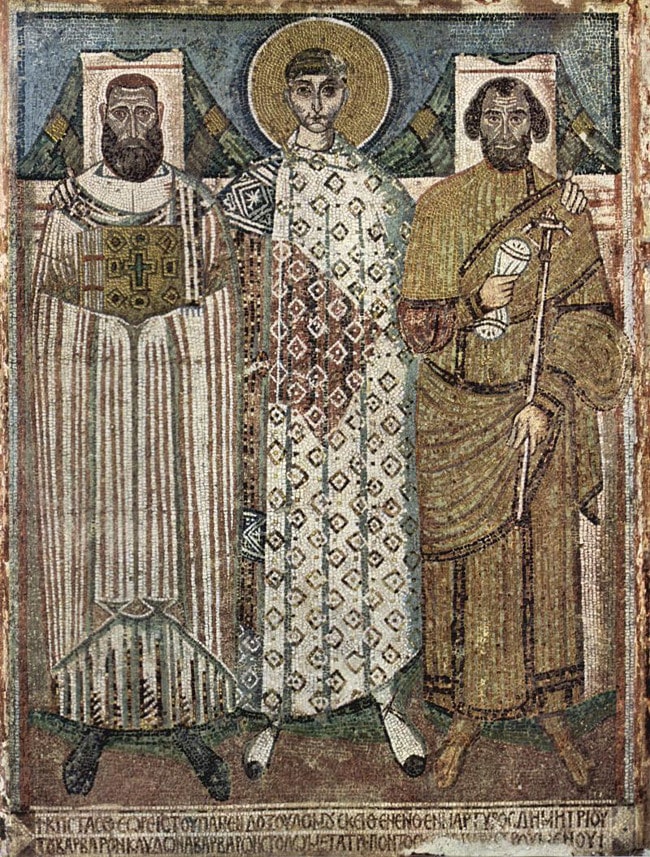 The Mosaic of St Demetrius with the Founders is another Byzantine masterpiece in another UNESCO World Heritage Site in Thessaloniki - the Church of Hagios Demetrius. Created after the church’s reconstruction in the first half of the 7th century, the mosaic is a are example of Byzantine art from the period between Justinian’s death (565) and Iconoclasm (c. 730). It depicts Thessaloniki’s patron saint of Saint Demetrius (Hagios Demetrios) with the so-called Founders; Eparch Leontios and John Bishop of Thessaloniki. The former built the first church, while the later had it reconstructed following a disastrous fire in the 7th century.

Mosaic of the Journey to Bethlehem, Chora Church 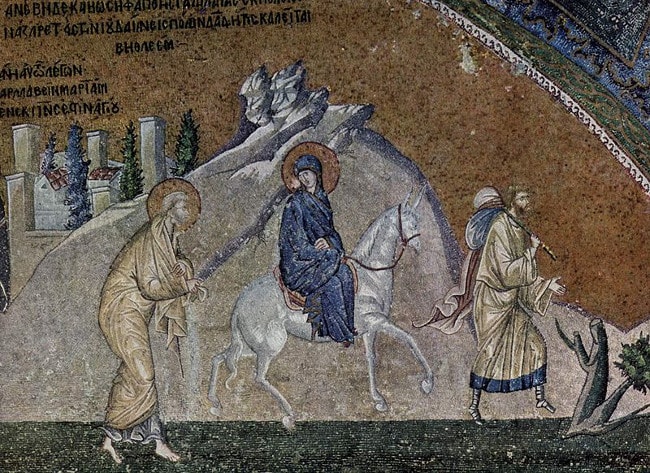 The Mosaic of the Journey to Bethlehem is one of the mosaics that decorate the so-called exonarthex or the outer entrance hall of the Chora Church in Istanbul. Depicting the journey of Joseph and Mary to Bethlehem, the mosaic was created during the Palaeologan Renaissance in the early 1300s although the original church dates from the 5th century. This as well as other Byzantine mosaics and frescoes in the Chora Church were rediscovered only after the church discontinued to serve as a mosque in 1948. It was converted into a mosque in the early 16th century when the Byzantines frescoes and mosaics were covered by plaster.