List of 10 Most Acclaimed Sculptures by Gian Lorenzo Bernini

Gian Lorenzo Bernini (1598 - 1680) was an Italian painter, architect and city planner who among others also designed the St. Peter’s Square and the Fountain of the Four Rivers (Fontana Dei Quattro Fiumi), to mention his most famous works in these areas. However, he was and still is above all admired and respected as a sculptor, with some referring to Bernini as the best sculptor of the Baroque. He created a long list of impressive works; discussed below are only 10 of the most acclaimed Bernini sculptures. 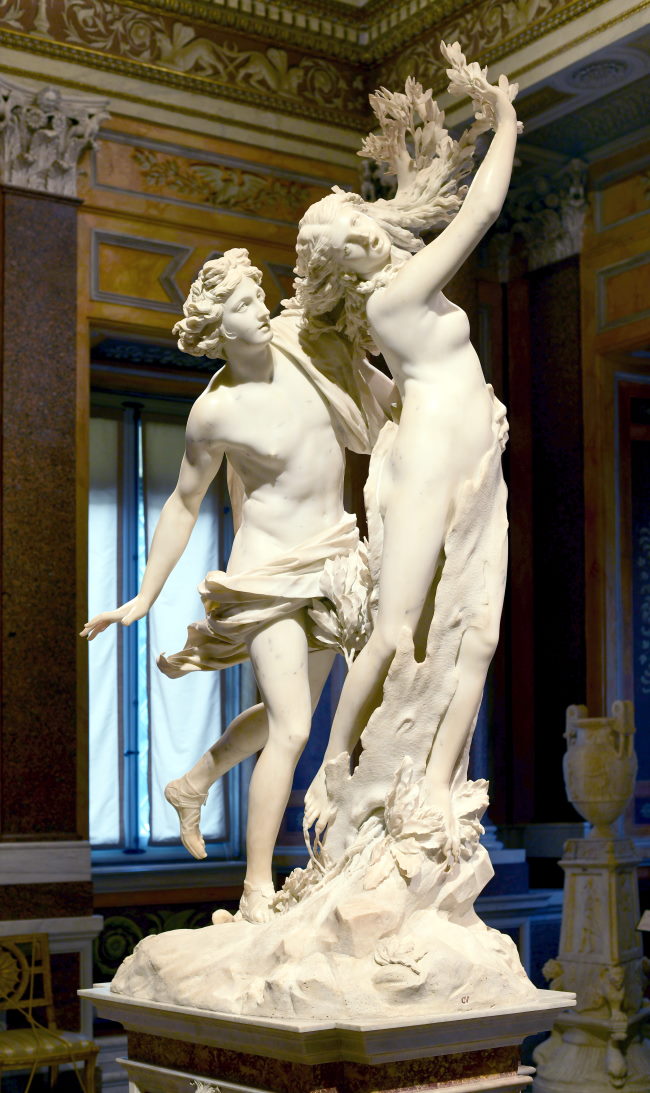 Bernini created Apollo and Daphne as the last in the series of works that were commissioned by Cardinal Scipione Borghese. One of his most famous sculptures was carved between 1622 and 1625 but it wasn’t completed by Bernini himself; he received a significant help from his student Giuliano Finelli who was responsible for creating the details showing Daphne’s conversion to a tree. According to the ancient Greek/Roman mythology, the nymph’s father, the river god Peneus, helped her avoid being captured by Apollo and transformed her into a laurel tree - the process that is starting to unfold in Bernini’s masterpiece. Owned by the Borghese family ever since, the marble masterpiece is today on display in the Borghese Gallery in Rome, Italy. 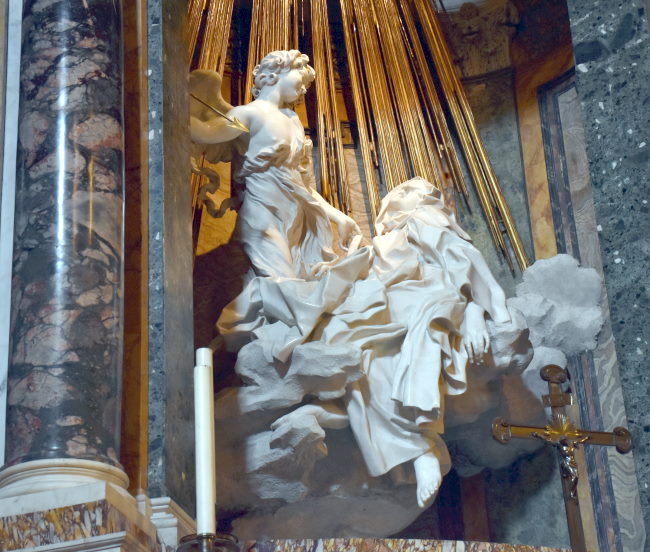 The Ecstasy of Saint Theresa is the central sculptural group and the focal point of the Cornaro Chapel in the Church of Santa Maria della Vittoria in Rome, Italy. Carved out of white marble between 1647 and 1652, the sculpture was according to Bernini created after Theresa of Avila’s own account of her mystical experience. He showed the moment an angel is about to pierce Saint Theresa’s heart with a fiery spear and according to the Saint, leave her filled with the love of God. On the left and right are opera-like-boxes with the Chapel’s commissioner Federigo Cardinal Cornaro and other members of the Cornaro family in conversation, reading, prayer and observing the scene. 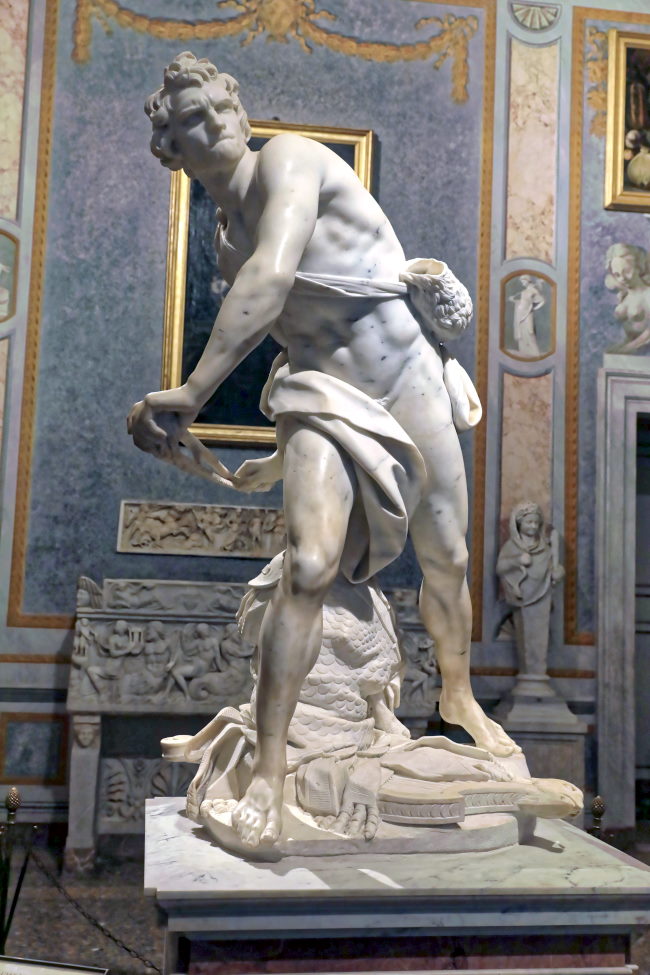 Bernini created David, a life-size sculpture of the biblical David in just 7 months from 1623 to 1624. The marble sculpture depicts a scene from the Old Testament showing the moment David is about to throw a stone that brought down Goliath and enabled him to behead his giant enemy. Compared to earlier sculptures on the same subject portraying David as the winner (Donatello, Verrocchio) or preparing for the battle (Michelangelo), Bernini’s version also differs by displaying movement and mental tension making it easy for the viewer to foresee what is about to follow. The sculpture, which was commissioned by Cardinal Scipione Borghese, is today housed in the Borghese Gallery in Rome.

The Rape of Proserpina 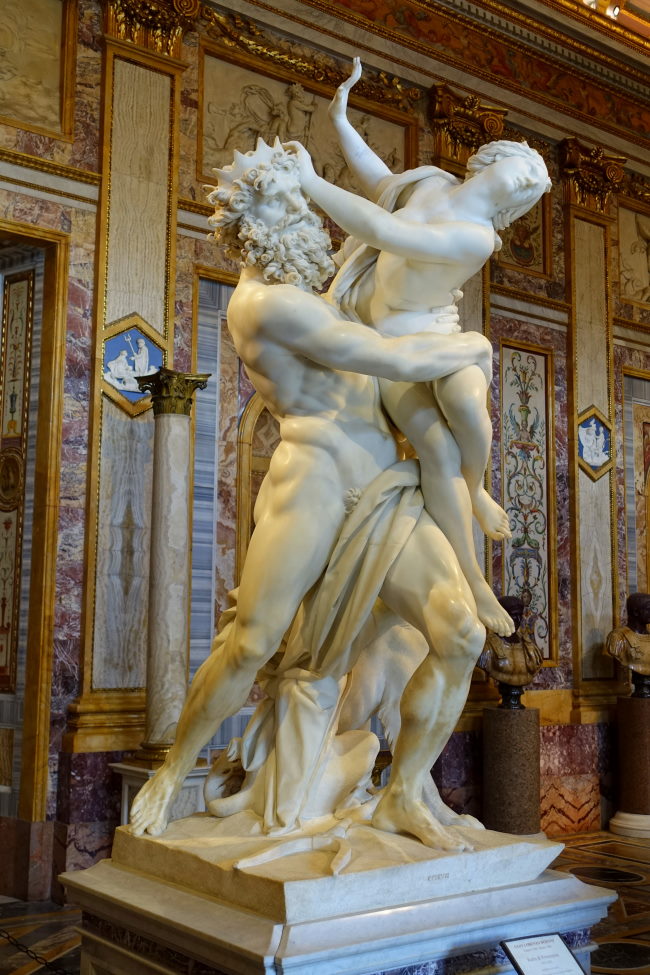 The Rape of Proserpina is a white marble masterpiece that was created by Bernini for Cardinal Scipione Borghese from 1621 to 1622 when the celebrated sculptor was only in his early twenties. Like its title suggests, it depicts the abduction of Proserpina, the ancient Roman goddess of fertility by the god of the underworld Pluto. According to Roman mythology, the abduction made her mother Ceres so desperate that she stopped the growth of vegetation. This compelled Jupiter, the king of the gods, to intervene and force Pluto to let Proserpina spend half a year with her mother above ground. Scipione Borghese soon gave the statue to Cardinal Ludovico Ludovisi who took it to his villa. However, Bernini’s masterpiece returned to the Borghese Gallery in 1908 shortly after it was acquired by the Italian state. 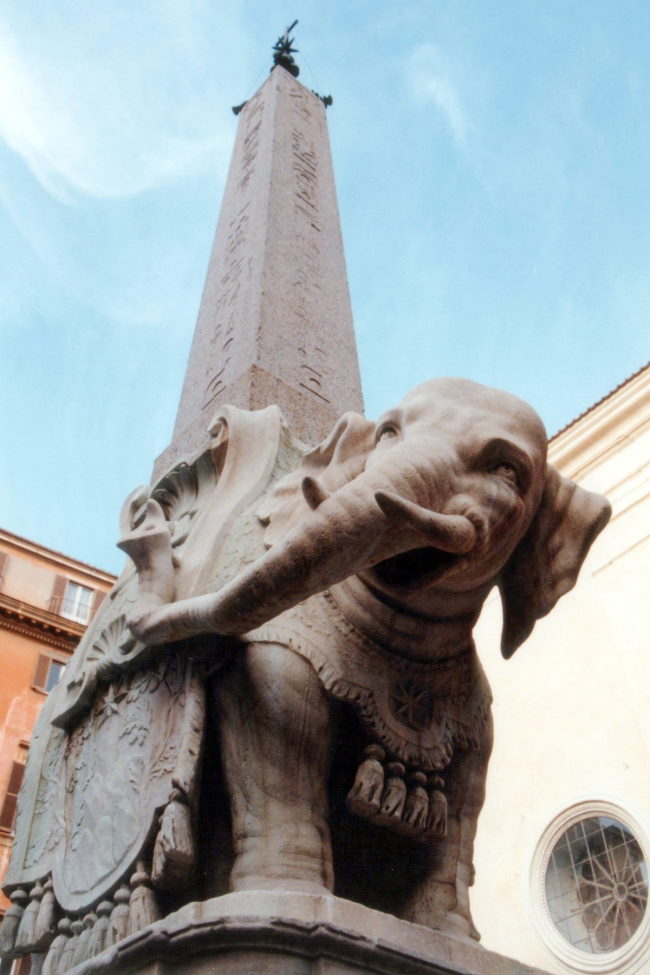 The Elephant and Obelisk is a sculpture of an almost life-size marble elephant standing on a narrow pedestal base that was erected in 1667 in the centre of the Piazza della Minerva in Rome, Italy. The elephant is carrying a shorty beforehand discovered ancient Egyptian obelisk which in turn is topped by Papal insignia and the cross. In 2016, one of Bernini’s most famous statues was damaged by vandals who broke away a tip of the elephant’s tusk. The tusk’s tip was soon recovered by the police and the statue was since repaired. 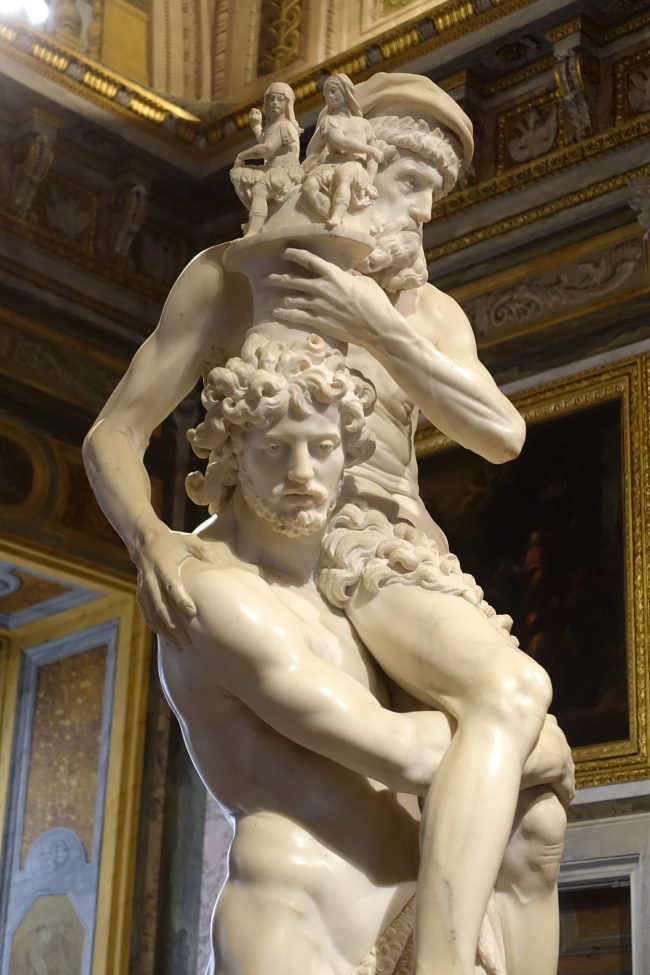 Aeneas, Anchises and Ascanius is a white marble sculpture that was created by Bernini in 1618-1621 when he was just 20 years old. The statue, which was commissioned by Cardinal Scipione Borghese, depicts a scene from the Aeneid showing the Trojan hero leading his family from the burning Troy. Bernini’s sculptural group, however, includes Aeneas’ father Anchises and son Ascanius but not his wife Creusa. According to the Latin epic poem, she was unable to keep up and when Aeneas returned for her, he found only her ghost. The artist’s father, Pietro Bernini, is believed to help his young son create the marble masterpiece which is today housed in the Borghese Gallery. 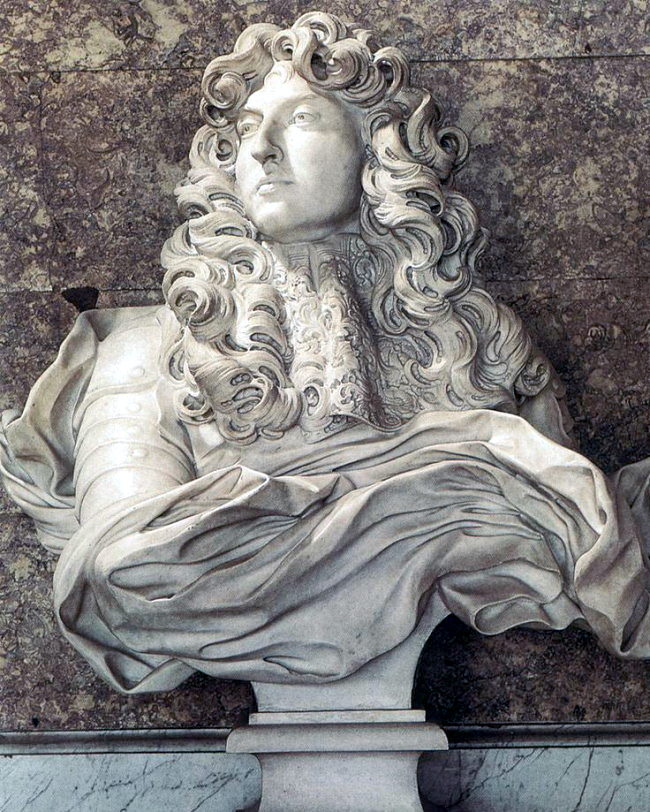 Bernini created the Bust of Louis XIV during his visit to Paris to design the east facade of the Louvre Palace. He started working on the bust that was commissioned by the French king shortly after his arrival on June 20, 1665, and unveiled it just before his departure less than four months later. While Bernini’s design for the Louvre Palace was rejected after his return to Rome, his visit to Paris resulted in another commission - the Equestrian statue of Louis XIV which, however, was completed only in 1684. The marble bust, which is today in the Palace of Versailles, is thus the only direct remnant of Bernini’s visit to France. 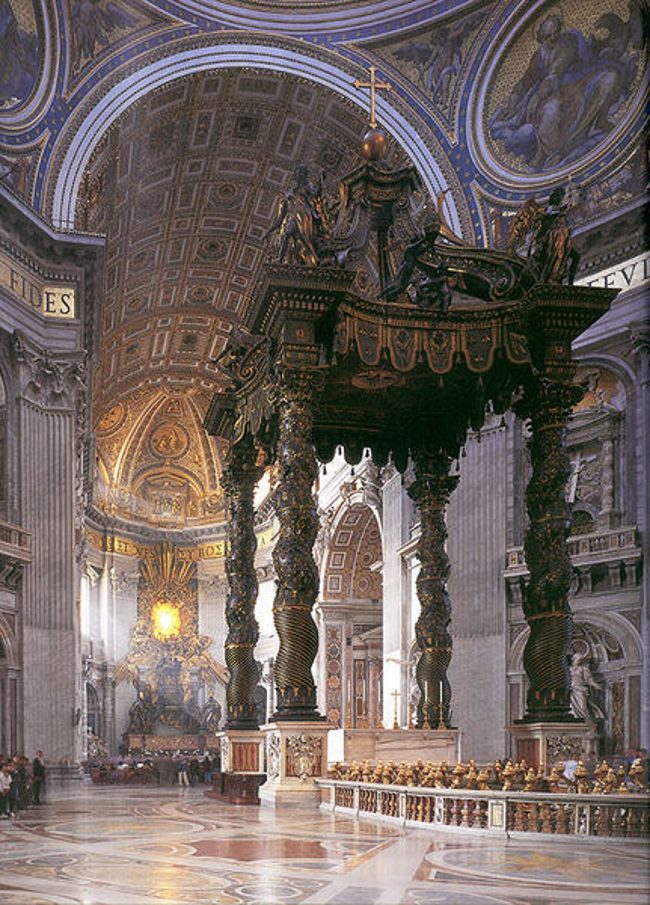 St. Peter’s Baldachin is a nearly 29 meters (95 feet) tall bronze canopy or baldachin above the high altar of St. Peter’s Basilica in the Vatican. The canopy is standing just above Saint Peter’s tomb underneath the high altar and was commissioned by Pope Urban VIII to mark one of the most sacred places for the Roman Catholic Christians. Bernini started to work on his masterpiece in 1624 and three years later, he unveiled the four 20 meters (65.6 feet) tall twisted Solomonic columns. He finished his first major commission in St. Peter’s Basilica in 1633 although the finishing touches continued into 1635. 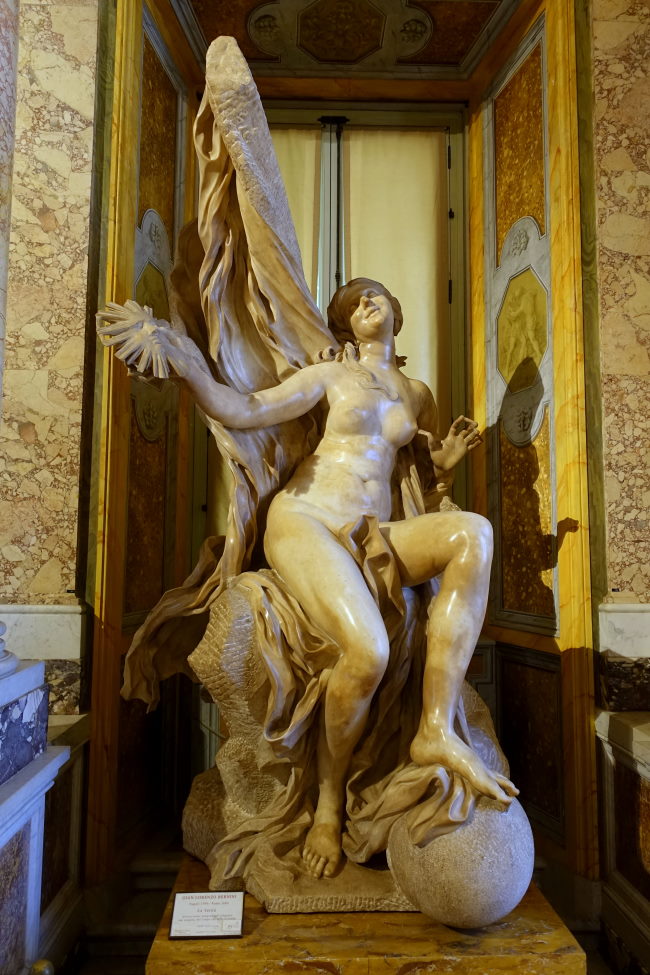 The Truth Unveiled by Time is a 2.8 meters (9.1 feet) tall marble sculpture which, unlike most Bernini sculptures, wasn’t created as a result of a commission. The sculpture was created from 1646 to 1652 and depicts Truth as a naked young woman unveiled by the figure of Time which, however, was never completed. After Bernini’s death, it passed to his first-born and remained in possession of the family until the 1920’s when it was purchased by the Italian state and moved to its current home in the Borghese Gallery.

A Faun Teased by Children 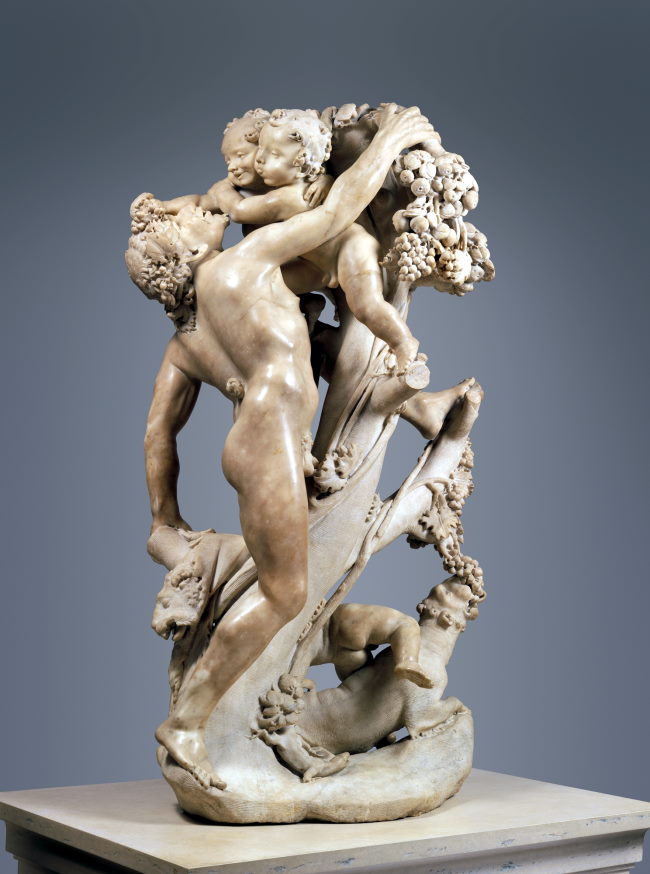 A Faun Teased by Children is an early Bernini sculpture that was created in his father Pietro’s studio from 1616 to 1617 when the great Baroque sculptor was just about 18 years old. Like its title suggests, the sculpture depicts a drunken faun (Roman equivalent of the ancient Greek satyr) trying to get more grapes from a tree. However, he is prevented from doing so by two little children pushing him back while grabbing the grapes from his forehead. The 1.3 meters (4.3 feet) tall marble sculpture was in possession of the Bernini family until it appeared in France sometime in the 20th century. In 1976, it was bought by its current owner the Metropolitan Museum of Art in New York.