Celebrated for his ceiling frescoes, Giovanni Battista Tiepolo (1969 - 1770) is widely regarded as the best Italian Rococo painter and according to some, the foremost painter of the 18th century. Famous for playful style, use of bright colors and theatricality of Baroque - while excluding chiaroscuro, Tiepolo’s subjects ranged from biblical and mythological to historical. Besides spectacular frescoes, the celebrated Rococo artist also created an outstanding number of awe-inspiring paintings, drawings and prints. Listed below are just a few of Tiepolo’s greatest works.

Allegory of the Planets and Continents 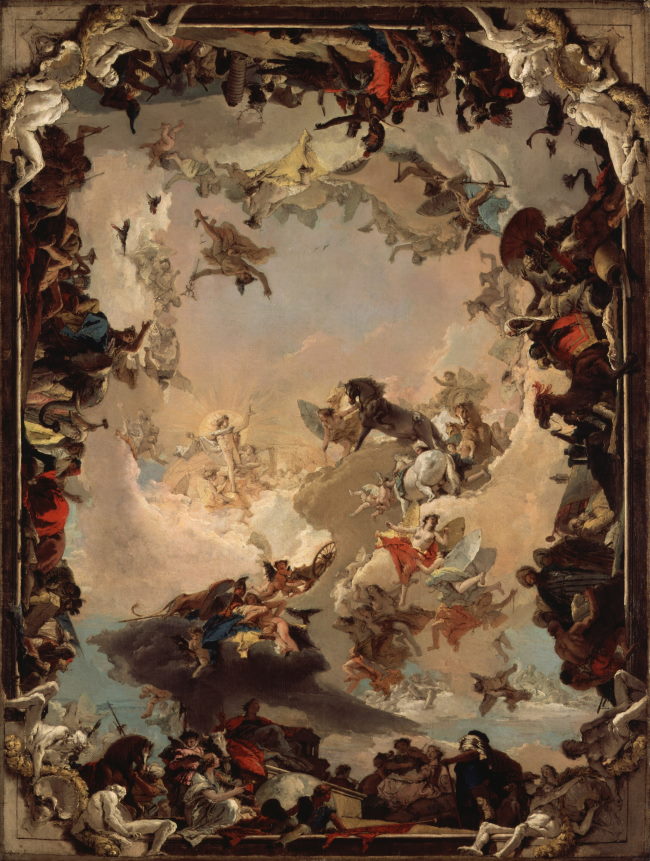 The Allegory of the Planets and Continents is an oil painting and a sketch for Tiepolo’s most famous work - the ceiling fresco above a staircase of the Würzburg Residence in Würzburg, Germany. While there are some notable differences between the two, both versions are centered around the sun god Apollo who is about to start his daily journey across the sky. Around him are Greco-Roman gods symbolising the planets and their orbiting around the Sun, while allegorical figures on the cornice represent four continents - Europe, America, Asia and Africa. Completed in 1752, the painting is today in collection of the Metropolitan Museum of Art in New York, NY. 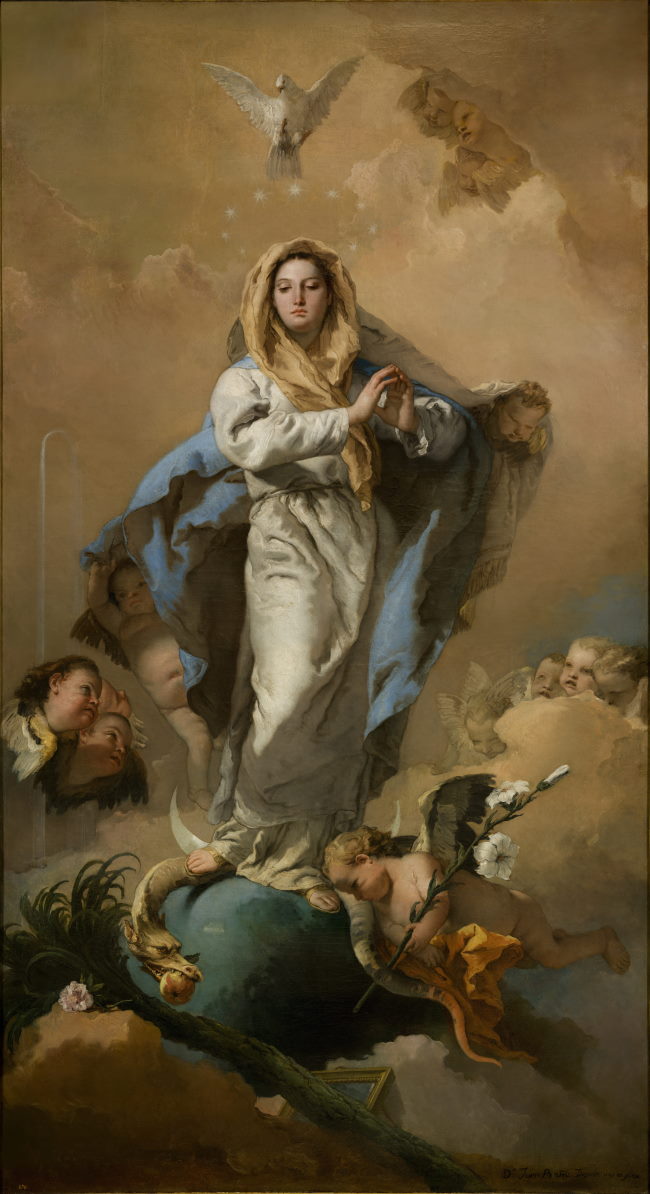 Like the painting’s title suggest, The Immaculate Conception depicts the Roman Catholic dogma of Immaculate Conception according to which Virgin Mary was free of the original sin at the time of her conception. Surrounded by angels and crowned by a circle of stars, Mary is depicted standing on the serpent symbolising her overcoming Eve’s original sin, while the palm leaf symbolises her victory over the devil. Tiepolo was commissioned to create the painting in 1767 as one of seven altarpieces for the royal church of San Pascual Bailon at Aranjuez, Spain, that was founded by Charles III of Spain in the same year. Today, the masterpiece is housed in the Prado Museum in Madrid.

The Triumph of Marius 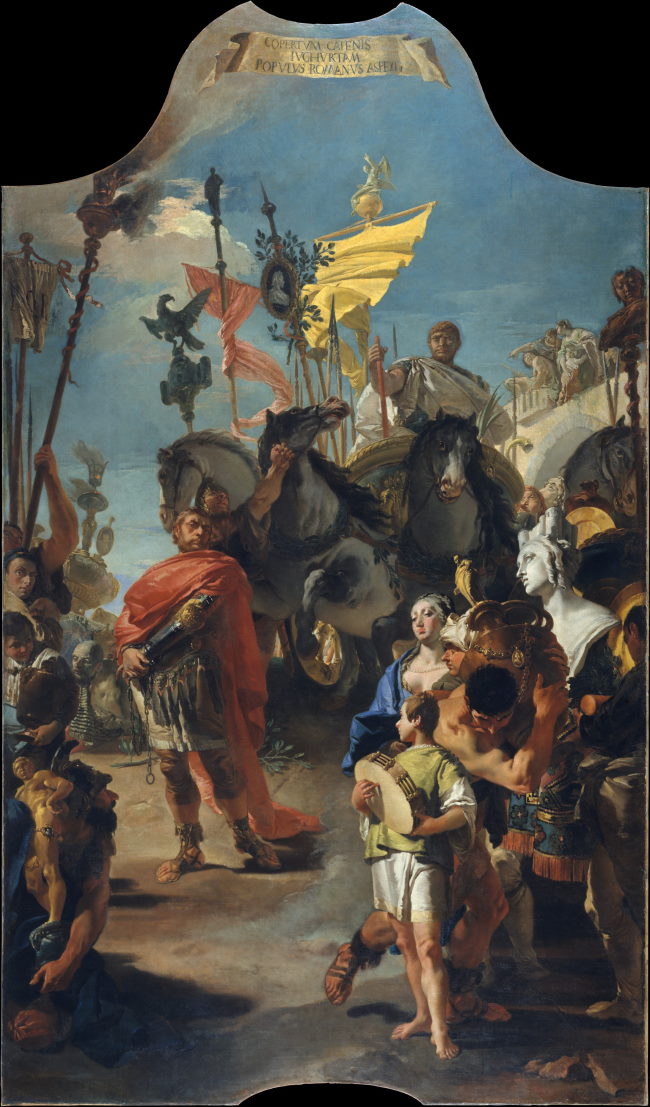 Tiepolo painted The Triumph of Marius in 1729 as a part of the series of ten paintings known as Ca’ Dolfin Tiepolos that were commissioned for the main room of the Palazzo Ca’ Dolfin in Venice, Italy. Just like other painting in the series, The Triumph of Marius depicts a historical scene from ancient Rome; it shows the triumphal procession of the Roman general Gaius Marius parading the captured Numidian king Jugurtha which took place in 104 B.C. The subject of the painting, which is today housed in the Metropolitan Museum of Art in New York, NY, is revealed by the Latin inscription at the top of the painting: “The people of Rome behold Jugurtha laden with chains”.

The Martyrdom of St. Agatha 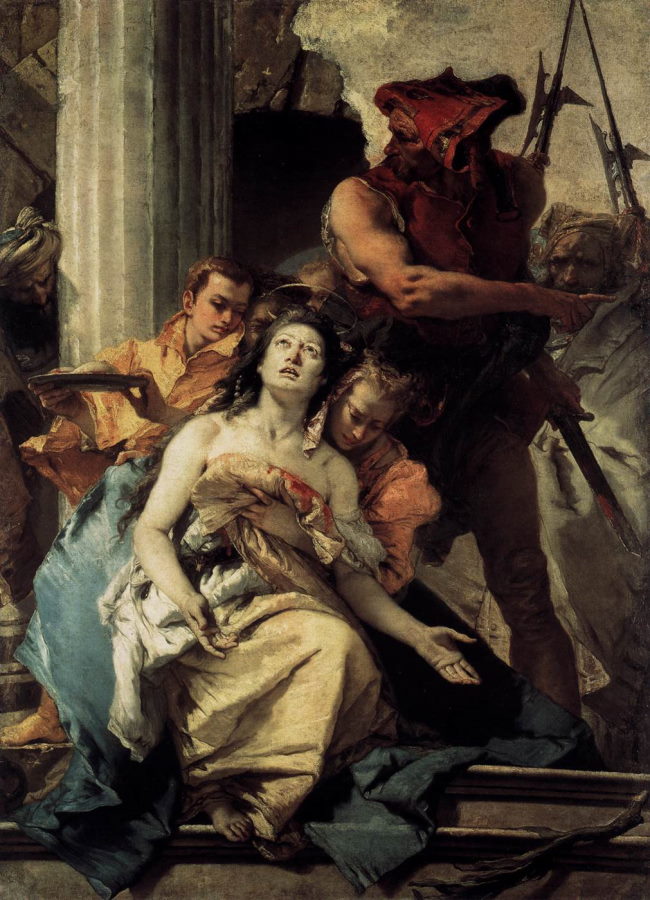 The Martyrdom of St. Agatha, today in the collection of the Berlin State Museum, Germany, was painted by Tiepolo around 1755 for the Benedictine nuns’ church at Lendinara near Rovigo, Italy. It depicts the martyrdom of the Christian saint Agatha of Sicily who was imprisoned, tortured and mutilated before dying in prison around 251. Tiepolo’s painting shows the saint after being mutilated with the expression of her face reflecting both pain and uncompromising spirituality. She is supported by a servant covering her bleeding chest, while the seemingly indifferent servant on the left is holding her severed breasts on a silver plate. In 1736, Tiepolo made the same subject painting as an altarpiece for the Basilica of Saint Anthony in Padua.

The Banquet of Cleopatra 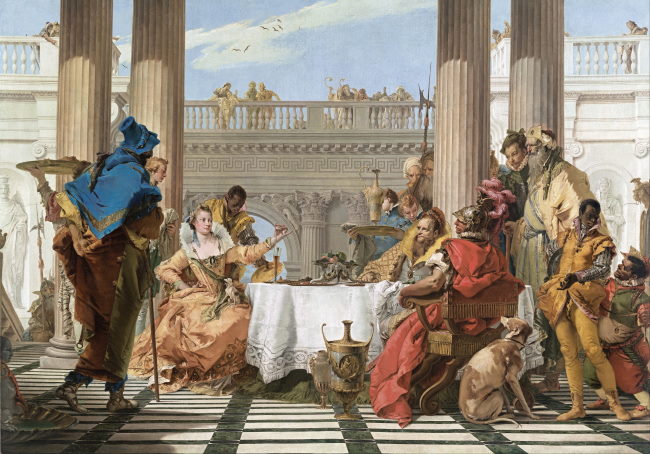 The Banquet of Cleopatra is one of several Tiepolo’s paintings dealing with the romance between the last Egyptian queen Cleopatra VII and the Roman Triumvir Mark Antony. Painted between 1743 and 1744, it depicts the moment Cleopatra is about to drop a priceless pearl from her earring into a glass of wine for it to dissolve so that she could drink it. By doing so, she thus won the wager against Mark Antony as to which can provide the most lavish banquet. Originally owned by Augustus III of Poland, the painting became a part of the Russian imperial collection at the turn of the 19th century. It was acquired by the National Gallery of Victoria in Melbourne, Australia, in 1932 when it was bought from the Soviet authorities.

An Allegory with Venus and Time 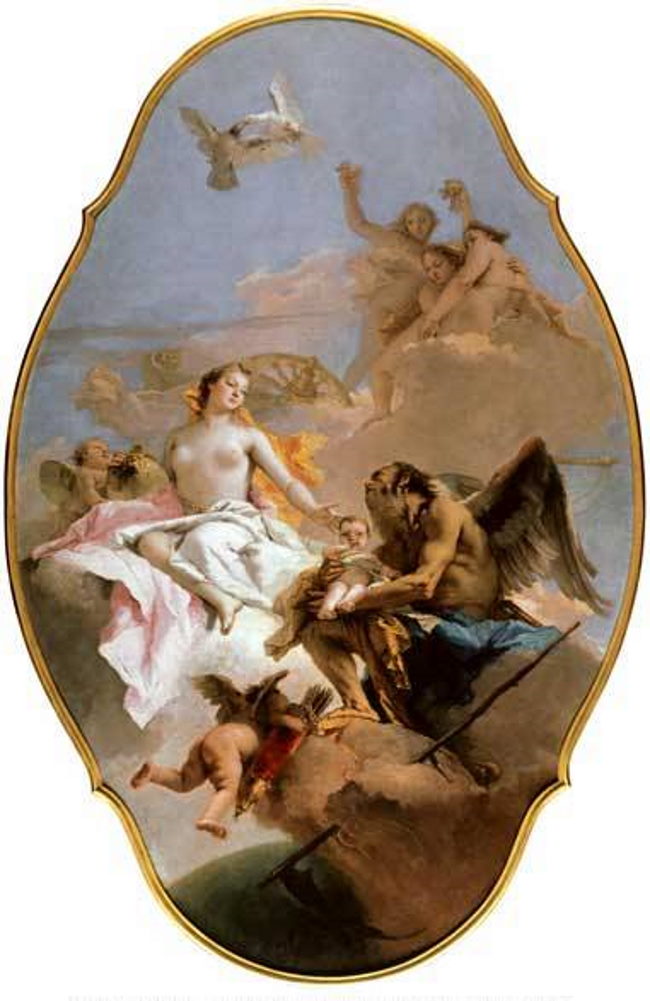 An Allegory with Venus and Time is an about 3 meters (9.8 feet) long, oval-shaped painting Tiepolo painted between 1753 and 1758 to decorate the ceiling of the Palazzo Contarini del Bovolo in Venice, Italy. The painting’s imagery, which has been suggested to possibly commemorate the birth of an heir, is centred around a young child who might represent the Trojan hero Aeneas. He is held by a winged man and a personification of Time looking towards Venus, the Roman goddess of love and fertility, on the left. The scene also includes the Three Graces scattering flowers above and Cupid holding sheaf of arrows below. Since 1969, this Tiepolo’s masterpiece has been in the collection of the National Gallery in London, UK.

Rinaldo and Armida in Her Garden 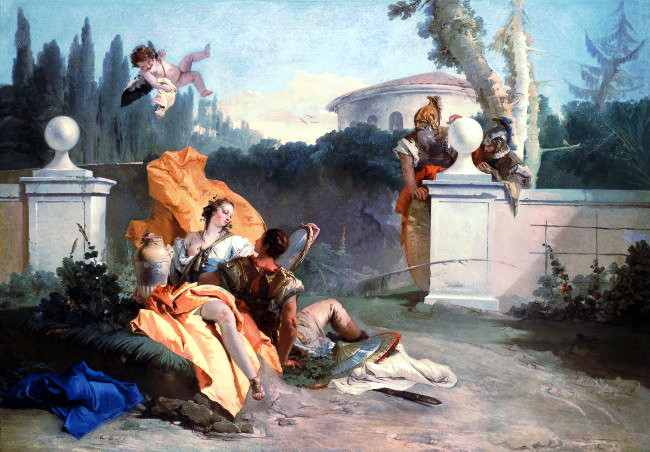 Painted between 1742 and 1745, Rinaldo and Armida in Her Garden is the second from Tieopolo’s series of large paintings dealing with the romance between the Christian knight and beautiful Saracen sorceress from the 16th century epic poem Jerusalem Delivered. The scene shows Rinaldo and Armida in her magical garden but the inclusion of the knight’s companions at the gate of the garden hints what’s coming next: Rinaldo being persuaded to leave Armida and return to the Crusade to liberate Jerusalem. The latter is the subject of the fourth and last of Tiepolo’s Rinaldo and Armida ‘series’ which is today housed in the Art Institute Chicago, IL. All four originally decorated the palace of the Cornaro family in Venice, Italy. 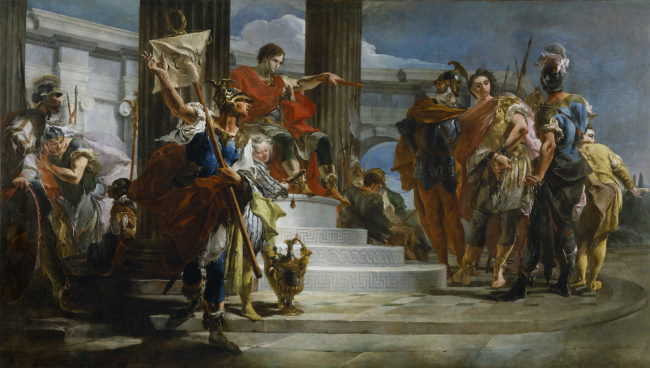 In his painting Scipio Africanus Freeing Massiva, Tiepolo depicted the moment Roman general freed the captured Carthaginian ally and sent him home to his uncle - the Numbian king Massinissa. Appreciating the gesture, the Nubian king decided to go to the side of the Romans and help turn the tide of the Second Punic War between Rome and Carthage in favor of the former. The painting, which is today in the collection of the Walters Art Museum in Baltimore, MD, was created between 1719 and 1721. It is thought to have been commissioned by the Cornero family who trace their descent from gens Cornelia, an ancient Roman patrician house whose members, among others, also included Scipio Africanus.